We are coming to the end of the second weekend of the 2011 season. We have a prototype for our mini-bot up and running. We have it on and moving around. The programmers are still having some issues with getting last years robot up and running. We also have a name for this years robot. The name is "lowrider". We have the lift for our robot about half way done. Between being downstairs working and getting something from the kitchen most of the guys on the team are drifting in and out of the living room to watch the football games. The animation team is still working on a storyboard. They had some inspiration yesterday afternoon when someone on the team put the soundtrack for TRON on. everyone is busy working on different projects down stairs. Update on the programmers: They have gotten the robot from last year up and working. They found out what the problem was. It had to do with the radio. So things are looking up from here for them. The guys are still working really hard to get things up and running. Things are continuing to look up from here.
Here is a pic of our safety dog: 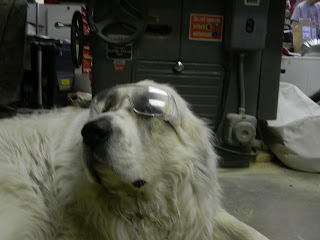